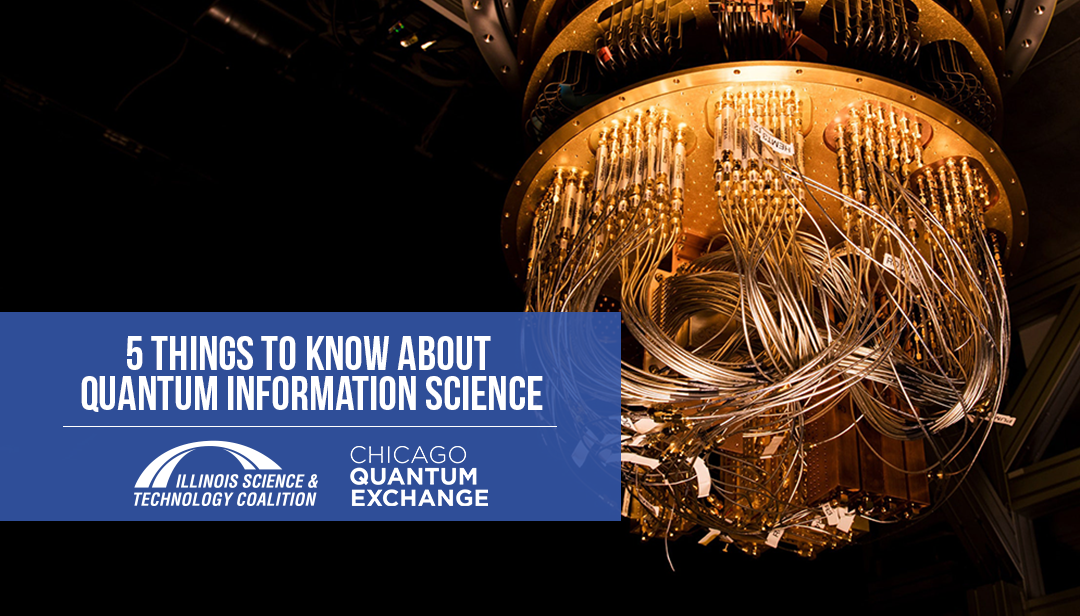 Quantum is a branch of physics that deals with the smallest particles in our universe. This field is relatively new and dynamic; we are only beginning to learn the ways in which we can apply quantum physics to our repertoire of technologies. One of the most promising applications is quantum information science (QIS), which can change the way we store and share information. Illinois researchers at Argonne National Laboratory, Fermilab, and at our many universities are at the forefront of developing and commercializing QIS technology. In collaboration with the Chicago Quantum Exchange, ISTC is releasing a series of three articles about quantum information science endeavors in Illinois. In this Catalyst, we explore what makes QIS promising, and how Illinois is investing in this new technology.

1. What is Quantum Information Science (QIS)?

Quantum information science, or QIS, is a practical application of quantum science. QIS is a burgeoning field focused on exploring the storage and sharing of information with quantum bits, or qubits. This includes creating quantum computers and building a quantum internet, both designed to use qubits instead of regular bits.

2. What makes qubits so special?

Qubits hold special quantum properties, most important among them are “multiple state” and “entanglement” properties. The multiple state property means qubits can store and process multiple pieces of information simultaneously. Entanglement is characterized by two features: maximum coordination and privacy. Maximum coordination means that qubits can coordinate instantaneously; a feature that is particularly useful in synchronizing clocks or other machines. Privacy refers to the fact that qubits cannot be hacked. Therefore, whether it’s state secrets or your credit card information, qubits offer secure information sharing.

Using qubits means faster and more secure information sharing and storage at a scale impossible with a standard bit. 3. How is the government investing in quantum?

The goal of this policy is to prepare for fast commercialization of quantum technology by 1) building a ‘quantum ready’ workforce, 2) supporting research, and 3) integrate industry perspectives early in the development process. Under the Rebuild Illinois Act passed by the Illinois General Assembly in 2019, the University of Chicago’s Pritzker School of Molecular Engineering and the University of Illinois each received a $100M grant to build and equip quantum research facilities in universities.

4. How do Illinois’ quantum assets stack up?

Illinois is home to a number of top research universities and federal labs that are pursuing quantum research. The University of Chicago, University of Illinois, Northwestern University, and the Illinois Institute of Technology are aggressively investing in top-tier research facilities and recruiting the best researchers to come to Illinois. The state is also home to two federal R&D labs, Argonne and Fermilab, both of which are leaders in quantum research. All of these institutions are collaborating on individual research projects or through the Chicago Quantum Exchange (CQE).

CQE was launched in 2018 by the University of Chicago, Argonne, Fermilab and the University of Illinois. Since then, CQE has welcomed several additional members, including Northwestern University and University of Wisconsin-Madison and Argonne, all of which represent over 130 researchers. The group also boasts seven corporate partners, including Boeing and IBM. CQE is building relationships between quantum researchers and corporate representatives to quickly advance discovery and innovation in this growing field. CQE and the state’s numerous institutions are positioning Illinois as a hotbed for QIS.

5. What are Illinois’ research successes?

The challenges QIS faces fit in either two buckets, hardware limitations or practical understanding. Illinois researchers are working on both. Researchers are working on building the right hardware to allow for far-reaching information transfer (sometimes also referred to as information teleportation). Researchers at UIUC’s Illinois Quantum Information Science and Technology Center (IQUIST) received a $1.5M grant from DOE to work on the design and assembly of materials and devices for the movement and storage of qubits. Qubits act differently than standard bits, and therefore must be programmed differently. Scientists at IQUIST received $450,000 from DOE to develop new algorithms specially designed for qubits.

One of the most exciting milestones in Illinois is Argonne’s Quantum Loop, a 52-mile fiber optic cable that researchers are using to move qubits. With this quantum loop, researchers will be able to study how qubits behave in the real world. This will inform the hardware and the algorithms that researchers are working on, thus accelerating innovation in QIS. Argonne scientists are collaborating to connect the Quantum Loop with Fermilab to create the Quantum Link, a quantum-based communication network. This will enable researchers to verify that QIS provides unhackable communications.

Quantum Information Science is still in its infancy, but has shown its potential for faster and safer storage and sharing of information. Research institutions in Illinois are focused on developing applications of QIS, and are also building relationships with companies who are interested in this new technology. This is setting up Illinois to not only be a leader in research, but also in commercialization.