Small differences in DNA can contribute to variations in response to treatments across patients – both benefits and side effects. Pharmacogenomics, the investigation of genetics and treatment response, is growing rapidly and is already helping us to deliver personalized medicine by tailoring drug therapy based on an individual’s unique genetic information.

Over 100 drugs now contain genetic information in their FDA-approved labeling in a number of therapeutic areas, including cancer chemotherapy, neurology, psychiatry, and anti-coagulation. Warfarin is an anticoagulant commonly prescribed to prevent and treat blood clots. Warfarin is one of the most difficult drugs to dose correctly, and inappropriate dosing increases the risk for serious adverse events, namely bleeding if the dose is too high and thrombosis if the dose is too low. Warfarin currently ranks as the leading drug-related cause of hospitalization among older adults. The dose that provides safe and effective warfarin levels varies as much as 20-fold among patients. Genes involved in warfarin metabolism (CYP2C9) and in mediating warfarin’s effects (VKORC1) significantly influence the dose of warfarin a patient requires to achieve optimal anticoagulation.

Warfarin pharmacogenetics is one example of personalized medicine at University of Illinois Hospital & Health Sciences System (UI Health). With the goal of improving the safety of warfarin through more appropriate dosing, genotyping for CYP2C9 and VKORC1 became the standard of care for patients starting warfarin in August 2012. A new order for warfarin automatically triggers a genotyping order and consultation with the pharmacogenetics service to assist with warfarin management. Genotype is available within 6 hours of the sample reaching the laboratory. The pharmacogenetics consultation service, consisting of faculty from the Colleges of Pharmacy and Medicine, then considers genotype in addition to clinical factors to recommend the best dose for the patient. While much is already known about the use of pharmacogenomics to guide the use of warfarin, this information is based largely on studies with small numbers of African-Americans and virtually no Hispanics. Results of studies we and others have conducted suggest that the pharmacogenomics of warfarin may vary according to ancestry. Collaborations between the faculty at the University of Illinois and others will soon shed light on common and uncommon genetic variants in underrepresented populations and how such information can help more patients benefit from advances in pharmacogenomics. Similar efforts are underway in other therapeutic areas, including asthma, sickle cell disease, and heart failure.

The era of personalized medicine is here. This is an exciting time for patients, clinicians, and researchers. 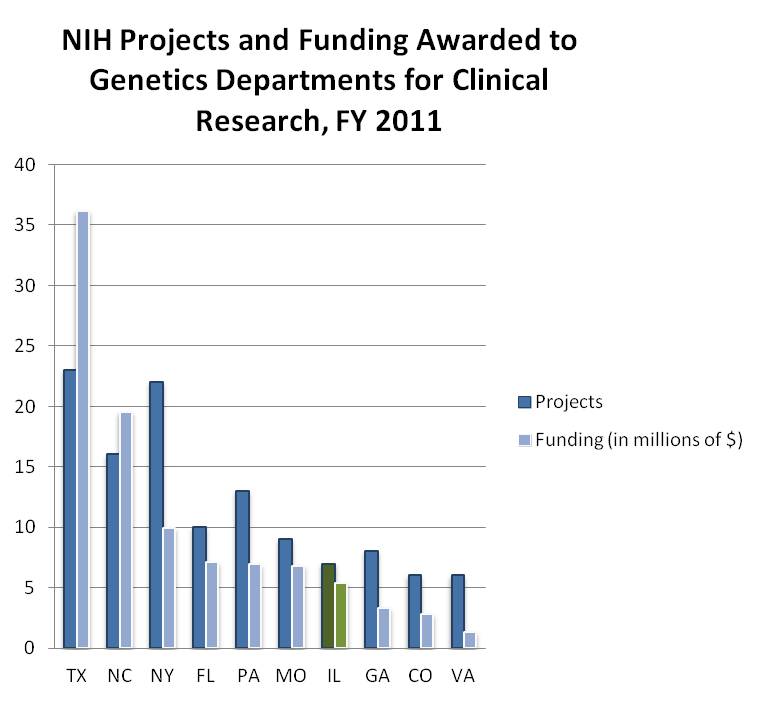 Clinical research carried out by genetics departments is essential to the development of personalized medicine. Genomics research reveals how certain biomarkers are affected by environmental factors and how we can manipulate the make up of these markers. In FY 2011, Illinois was the only Midwestern state to feature among the most successful states at capturing NIH funding for genetics clinical research. In 2011,Illinois was 7th in NIH funding in this area.