Illinois is poised to usher in a new era in digital capability with computational simulation and big data analytics. Quite literally, 2013 will be the “biggest” year in the nation’s history for supercomputing and the extreme data storage systems that push data into and out of these complex machines.

NCSA (National Center for Supercomputing Applications), at the University of Illinois at Urbana-Champaign, will soon boast the world’s most powerful supercomputer and the world’s largest, fastest, data storage system. Blue Waters will be measured as the most “powerful” due to its promise to run a wide variety of applications at a petaflop (flop = floating point operation) per second or more. This will be accomplished using approximately 25,000 Cray compute nodes – more commonly thought of as individual computers – 1.5 petabytes of system memory on 190,000 memory DIMMs, and 49,000 AMD processors.

Never before has a computer been outfitted with so much memory and with such speed.  Imagine loading a 500-terabyte data file into main memory for deep analytics – within minutes. Imagine running 100 jobs simultaneously – each with 10GB input decks – finishing today. Imagine running a complex physics simulation that takes a week today and finishing it in an hour.

Imagine what you could do with infinite compute power?  We might as well ask the question, since performance at this sort of scale is mindboggling enough to act like infinite resources. These are the very issues NCSA is addressing with its science and engineering partners today.

Now – imagine what we could do with 100Gb bandwidth between Champaign and Chicago, or Peoria, or Moline, Rockford, or Libertyville.  Why, it would feel like we were neighbors!

NCSA’s iForge: A Supercomputer for Industry

When ranked by connectivity – the quantity of data that could be transmitted if all the fiber optic cable passing through a given location were bundled -, Chicago is the 3rd most connected city in the US. This means Chicago has a broadband infrastructure that enables faster and cheaper transmission of massive quantities of data by industry and researchers. Overall, this translates into an economic advantage for the city and Illinois as it enables unique uses of data and saves costs for big data users. 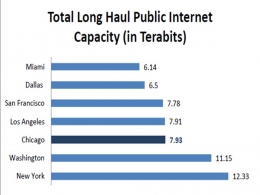